A very tiny version of Hell …

Yup, that’s what computers are … at least that’s my story for the past few weeks.

First, I got some kind of virus — which lasted longer than the common cold, and the computer went in for a giant clean up, browsers cleared, favorites deleted — along with my passwords, etc., for many of the things I commonly use, like this website (you should have seen my face turning blue).  Now, I’m generally pretty calm about these things, can say a few mantras, take a break, etc., (in my defense my mother has been here for nigh on a month) but after paying almost what the computer might be worth to have it cleaned up I found I couldn’t do postings or updates.  My showroom is opening in a week — and I haven’t even been posting pics to the site or letting you all know what a cock-up that has been (notice the male derivative rather than the female here, we’ve had enough female part bashing in the last couple of weeks …). 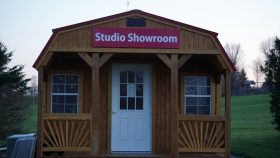 Second, EVERYTHING we’ve tried to do to get the showroom done has been barely grinding along.  The sign is up … and that was a couple of weeks late.  Mr. Mac (the wonderkind) has been working his tiny assperdasperous off.  We thought the bulk of what needed to be done would be done in April — but you all know what April was like!  Then the darn boat had to get into the water last weekend, and then the mast had to be put up this week, and the cradle moved, and so on, and so on.  At this rate I expect we will be working on it when people show up on Saturday!  And then — everything we look for seems to have disappeared!!!!  Do you know where that counter went that we made for a previous show?  We don’t either.  So, we say those famous last words “I thought I just saw that”, and do it all over again!  Then his compressor stops compressing …

Third, the things I ordered for the opening — like jars for my creams (I’m going to do some of my regular stuff that I had at my health food store 200 years ago), they have no caps!  The caps are on back order — so they are holding the whole order until the caps come in, and I’ve paid for the whole darn shipment … Or, the lovely cotton scarves/shawls I got … I was going to paint on some of them, but of course the fabric paint is held up somewhere, along with the gold highlight.  Arrgghh.

It’s going to be a pretty soft opening — or EVERYTHING is going to show up on Thursday and I’ll be running around like a chicken with it’s head cut off (not a pretty analogy, but you get the idea …).

I’m going to crack open the kiln now … saying my version of a prayer to the kiln gods.  There’s four good teapots in there, if they turned out! 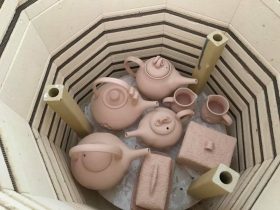 Now they’re back in the kiln getting glazed!

Hope you’re having a great day …