True.  I am shocked.  One ad on Facebook for upcoming classes, and the evening classes filled in ONE DAY, and the daytime class is filled now.  It’s the most amazing thing!  So I had to clean up the studio … and I’m making glazes tomorrow.  Luckily my handy hubby installed the Gleco Trap on the sink to I can actually use warm water!  That’s true love for you.  I had to post the classes starting in January already, and have already had confirmed registrations.  Amazing!  What a response. 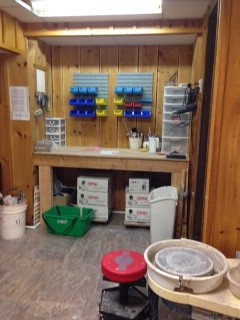 Studio as clean as it will ever be!

So I guess I will actually order a couple more wheels from Pottery Supply House.  One part of me hates to do it (as I just sold some really good wheels before I moved back in May), but if the classes are going to carry on … at least I didn’t sell the new stools!  I LOVE these adjustable stools (from Canadian Tire no less).  Short people like me can reach the peddle … and tall people don’t have to wreck their backs.  Well worth that investment, even if they only seem to last a couple of years.

It’s grey here today in Grey County, but I’ve been watching the reports of car accidents back in the old neighborhood (Cobourg, Port Hope, Trenton) and it seems the snow is actually sticking there.  Here we had a very large Heron walking by (like some kind of prehistoric winged creature), and then a flock of ducks (might have been woodies, I’m not good at ducks!), followed by beavers or muskrats (we couldn’t get a good look at the tail, but boy, could they swim!). 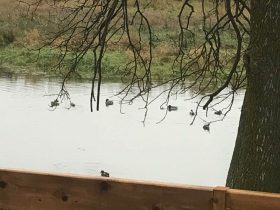 What else is there to do on a grey day?  There’s always puzzles I guess … even though the clever dog got up behind the table, put his head through the railing, snuffled all of the meat and some of the cheese! 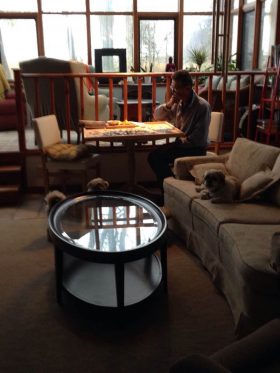 We took to the road last night, in spite of the weather; headed to Owen Sound to the movies.  We even got in for free!  Our lovely neighbors gave us gift certificates last year for the Cineplex and we finally used them to see the newest rendition of ‘A Star is Born’.  I had heard many good things about it, read great reviews, etc., and sometimes that’s not a good thing.  Give me a choice and I’d still go with the Barbara Streisand and Kris Kristofferson, not that I didn’t like the new version — but I never lost track of the fact that it was Lady Gaga and Bradley Cooper.  And, I thought by now there’d be room for more than one star in the sky, which is to say (spoiler alert, don’t read any further if you haven’t seen it!) maybe he could have moved to Canada (or Colorado), taken up weed, and gone along his own happy way!  The music was good though … I think I’m going to have a look at all of the versions, I can’t remember Judy Garland’s, but the critics say that one was the best.

Hope you’re having a great day, even if it’s grey!